The ‘3D scene’ tab allows you to select the type of data display on the 3D scene - a globe or a plane (Pic. 6.33.). It is also possible to connect Yandex Panoramas and Google Street View data by specifying the appropriate API keys. Also you can specify a quality value that affects the performance of a 3D scene.

There is also an option - to set the extent by the layer loaded in Web GIS (Pic. 6.35.). Clicking on the folder icon with a plus opens a window where you can select the layer on which you want to specify the extent of the 3D scene. 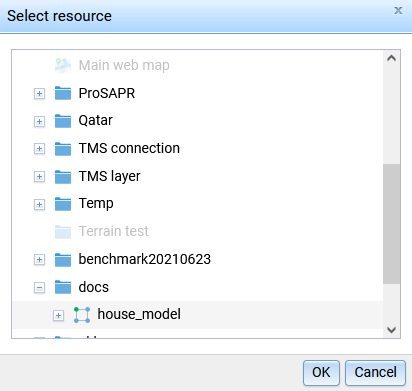 The ‘Items’ tab allows you to add and remove items of various NextGIS Web resources on/from a 3D scene - for example, 3D styles and 3D tilesets (Fig. 38), as well as form them into various groups. 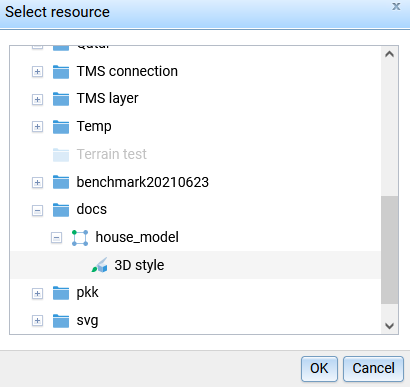 The Visible option means that when a 3D scene is opened this element will be displayed by default.

To upload a basemap onto a 3D scene, you must first create it in NextGIS Web. For this there is a resource Basemap (Pic. 6.40.).

You can specify the URL or find the one you need in the search In the Settings, if there is one in QuickMapServices (Pic. 6.41.) directory.

The Terrain resource of the previously created TMS layer is added to the 3D scene on the Terrain tab (ngw3D_terrain_3D_scen_en). Adding occurs through the standard addition of a resource in the corresponding window (ngw3D_select_terrain_3D_scen). 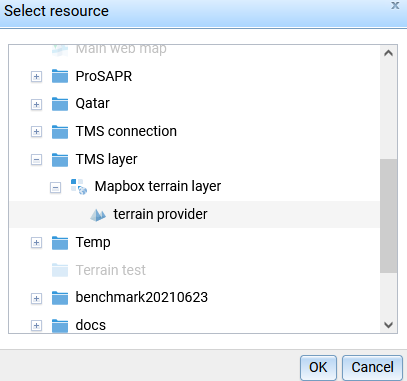 Pic. 6.43. Selecting the Terrain resource for a 3D scene

Permissions, description and metadata are optional.