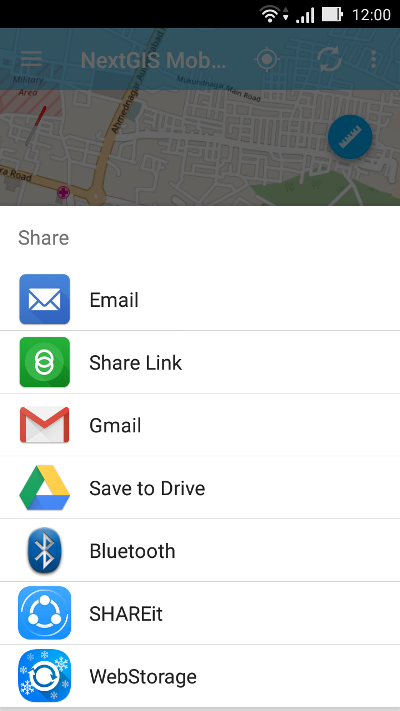 After you select a share option, data in the selected layer will be recorded in GeoJSON format (coordinate system Web Mercator, EPSG:3857) and exported via the selected application. The name of GeoJSON file will be the same as the name of the exported layer.

Some of the share options (availability is dependent on the apps installed on your device):

In many Android versions to save a file on the device memory card you need a file manager app (for example, ES Explorer or similar).

Each feature in vector layer can have one or more photos attached to it. Photos are stored separately as image files and added to archive file with layer data during the export. For each feature a separate attachments folder is generated in the archive, the name of the folder corresponds to feature ID.

4 photos are attached to a feature. These 4 photos are stored in the folder which name is similar to the feature ID.

To start exporting tracks first find “My Tracks” group in Layers tree panel. Then tap on contextual menu button as shown in Pic. 9.69. and select “List”.

Select a track you want to export by ticking the corresponding checkbox, and buttons in Top toolbar will become active as shown in Pic. 9.71.

After you select a share option, data in the selected track will be recorded in GPX format and exported via the selected application.